Sale on canvas prints! Use code XPNMND at checkout for a 20% discount off your entire order! 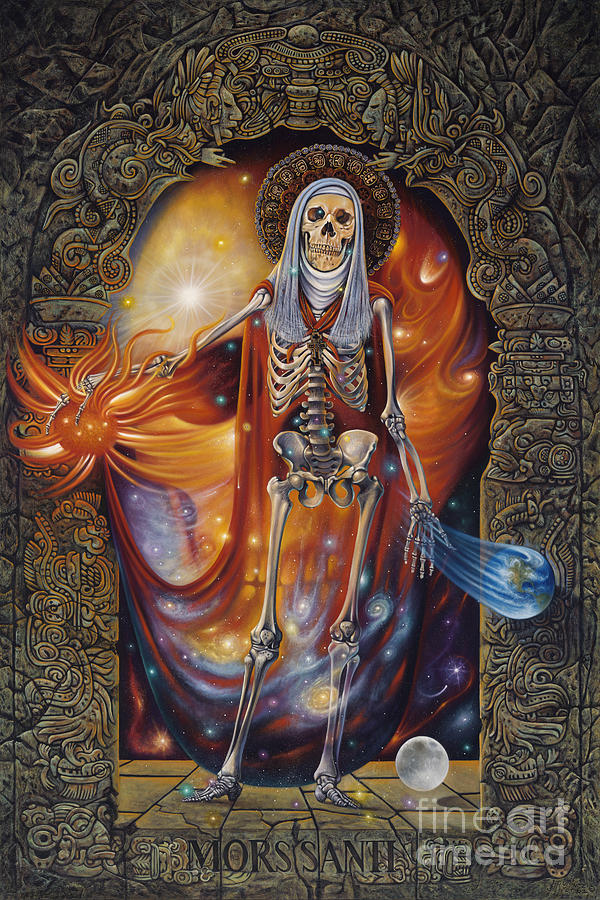 This original painting is currently for sale.   At the present time, originals are not offered for sale through the Ricardo Chavez-Mendez - Website secure checkout system.   Please contact the artist directly to inquire about purchasing this original.

The Grim Reaper, La Muerte, La Huesuda (the bone lady known by rural Mexico), Mors Santi as renamed by artist Ricardo Chavez-Mendez, has been portrayed as something to be feared. But Ricardo portrays her as standing in a doorway as a lady in waiting, waiting for you to tell her when you are ready to leave this realm. We should have no fear for she comes to deliver us to our maker, peacefully.

Most images of Mors Santi have her holding a scythe and a globe symbolizing that life itself is held in her hands, for the scythe cuts the silver thread between this realm and the next but Ricardo places the sun in her hand and her other hand playing with the earth. Sun to the artist symbolizes energy and so when she takes life from the earth she is in essence taking our energy and giving it back to the universe. Other images have her holding an hourglass symbolizing death as not final but merely a transition to another existence, like flipping over an hourglass basically starting time over. Ricardo created the painting in the year 2012 so the Mayan calendar is prevalent here. Instead of an hourglass he uses the calendar to represent time and that the earth did not end as the Mayans prophesied but a new era has begun...another transition of existence.
The color of her robe varies in most images, depending on the artist's rendition but here Ricardo uses the color red for the constellation Orion. In ancient cultures (Mayan, Aztecs, Egyptian, etc...) all believed all humans came from that constellation and the robe encompasses even the universe reminding us that even life has to answer to death. Mayan motifs adorn Mors Santi all along the border of the image with one effigy at top right playing with the Mayan calendar with his finger. Again another reference to time and how death awaits our departure. As an Orthodox Catholic, Ricardo made her Orthodox as well, bearing an Orthodox cross along her rib cage.

Whatever belief system, she awaits you. Known by many, particular to no one. All mortals must answer to her, no matter what your station in life; Rich, poor, color or creed...no matter, in death we are all equal.

The textures in the painting are to be marveled. If you happen to be in downtown Albuquerque, stop in and see her in 3-D!

Remember death? Thank you for your vote...